Well, I don't have only re-inkers on my desk this Wednesday, but I've got to admit they're dominating a bit. They're new, you see, and I haven't figured out where to store them yet. 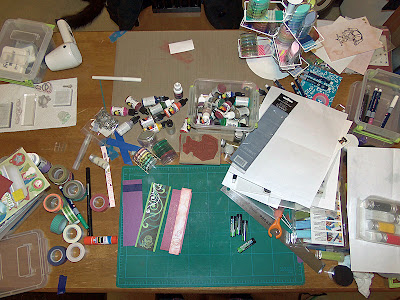 Also notable are a couple of bookmarks, waiting for photography or just to be finished, and a stack of unmounted rubber stamps topped with a "mounted" one. Well, it is mounted, but not on nice foam and lovely wood -- just on a chunk, because it was too big for me to successfully stamp with otherwise.

"Have you got a chunk of wood about three by four inches?" I asked. "No," was the reply, "but I've got a saw." And tah-dah, such a chunk was made. A little glue stick work later, and some rough trimming with the craft knife, and the stamp was, if not beautifully mounted, at least useable.

(You can see one of the attempts at unmounted stamping on the upper right -- rather smudgy in some places and understamped in others.)

Posted by belldoubleyou at 6:54 PM

Email ThisBlogThis!Share to TwitterShare to FacebookShare to Pinterest
Labels: woyww