State of the Stash #18: Dry Embossing and Grammar

I mentioned last week that I had ordered some Sizzix stuff from Joann while it was on sale. It arrived on Tuesday.

I do actually have a use for the thin die adapter, because I own some thin dies. I know, my purchase was made the wrong way 'round. But mostly I bought it because Lawn Fawn is coming out with dies to fit around their stamps. And I will want them, precious. And I don't want to just own them, I want to be able to use them! So I had been looking for a reasonable price on the adapter.

(You may notice I also pay very little attention to the convention of not starting sentences with "And", "But", "So", etc. While it's not good practice in formal writing, it's not ungrammatical.)

Then I went looking for other Sizzix stuff I might like -- mostly embossing folders. Of course, I found rather too much that I liked a little bit, so I had to narrow it down. I bought a set of embossing folders with abstract designs that should look good on bookmarks.

I also found one of the Texturz "starter kit"s for a very good price. Now, I received an "Impressions Pad" -- half of the texture plate embossing sandwich -- for Christmas. But I didn't get the silicone rubber half. So I figured, hey, why not get a whole starter set? It's got the silicone rubber, three 2-sided texture plates, and the impressions pad to boot. (And since I haven't used the impressions pad I have, we can return it!) 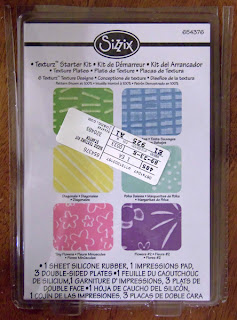 I'm not sure about the whole texture plate system. It gives a more shallow and less crisp impression than the folders do. However, I think that while the embossing folders produce things that look better to my eyes, the plates might be better for paper I'm going to use in bookmarks -- because the shallow impression leaves the paper flatter. So I'll try them out and see.

Joann Sizzix haul: I don't see bloggers talking about embossing plates at all, just embossing folders. But Sizzix is still making them, so presumably someone is buying them. If anyone else has tried both, I'd love to hear your opinions.