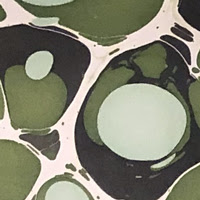 I'm not sure I've ever been really satisfied with a post title that wasn't a terrible pun or reference.

More to the point, I've been wanting to print out and perfect-bind some fantastic fanfiction novels that I think are so good they deserve a physical place in my library. The thing is, I don't really do representational art, and there isn't a lot of fanart around for this particular series. So what, I wondered, should I do about covers?

I got to thinking about colors, but I didn't want a solid color. Eventually I ended up at "aha, there's a local paper store, I think they sell great big marbled sheets -- that would be pretty!"

So I went and got some paper. I can't emphasize enough how beautiful this is outside of the photo. The feathery one is pearlescent and shiny! (These are big -- nearly 20 x 30 inches!) 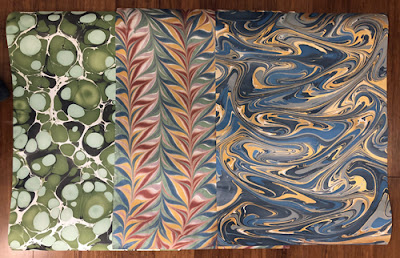 And then a while later I went back and got some more in a different style, because PRETTY PAPER. And also because there are a bunch of books I need to print and bind. 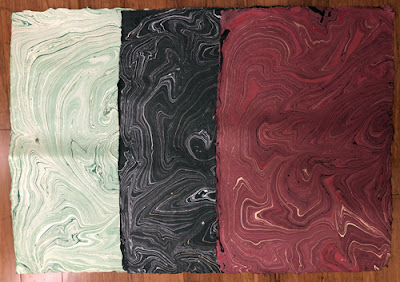 And then a week later I decided that I needed another green selection, so I spent a whole Saturday hunting through the various art supply stores that were any slightly-mad definition of the word "nearby", and came home with two whole sheets of paper... one of them from the paper store I had bought the others from in the first place. 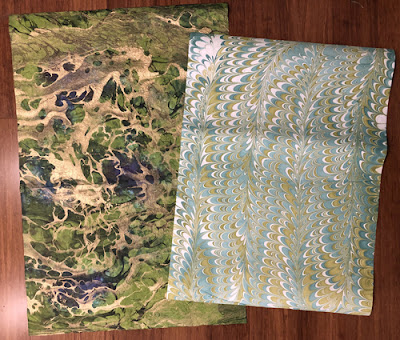 I suspect I can't even print on the one with gold swirls, because it's a kind of soft pre-crumpled paper. Maybe if I fix it to some carrier cardstock somehow?

My fixation on finding The Perfect Green Marbled Paper came to an end only when I went out and bought a marbling kit. I don't want to make the paper myself, but somehow without having the kit I couldn't accept these beautiful-but-not-quite-what-I-imagined papers as good enough. Now that I could make something closer to my imagination, I think they're probably fine.

Brains are weird.
Posted by belldoubleyou at 7:24 PM